How Did I End Up Here?

I’m not the only one who has experienced pain, heartbreak and loss

I’m not the only one who has made bad decisions, broke down and hit rock bottom

I’m not the only one who has been depressed, broken and felt totally stuck and alone

So even though it’s very uncomfortable for me to talk about this. This email is for YOU.

In the space of one month…

My “highschool sweetheart”, the first girl I had ever truly loved, dumped me for her male best friend (Which I don’t blame her for – I’ll explain later)

Two and a half years before…

She was beautiful, funny and smart

We did EVERYTHING together, we were inseparable

It couldn’t have been more perfect

Then one night everything changed

So what did I do?

I kept it a secret

A carried on the relationship, lying to my girlfriend’s face about what had happened

I vividly remember her saying to me “you would never cheat on me, right?”

and I would LIE and say “Never”

It tore me up inside

The guilt was unbearable

Constantly paranoid about my lies being exposed

So what did I do?

It makes me sick thinking about it these days

But eventually, all of this caught up with me…

It became too much to bear and I told her the truth.

and she ended the relationship

and I was left heartbroken, empty and alone

and to make matters worse, my grandfather passed away shorty afterwards

All of my anger, heartache, frustration, depression and pain – I tried to cover it all up

I started drinking heavily 3 times week and blamed it on “being a student”, I started rewarding myself with junk food every time I exercised, I was sabotaging my own life and purposefully not taking care of myself

I was OUT OF CONTROL.

Just when I thought things couldn’t get any worse… they did.

Tomorrow we’re going to revisit that moment together and I’m going to attach for you our TRINITY Quick & Easy Smoothies eBook for FREE that includes 12 delicious, fat-burning smoothies

But ONLY if you open my email tomorrow!

Your copy of Quick & Easy Recipes can be found here: 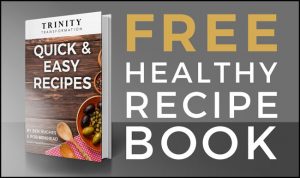